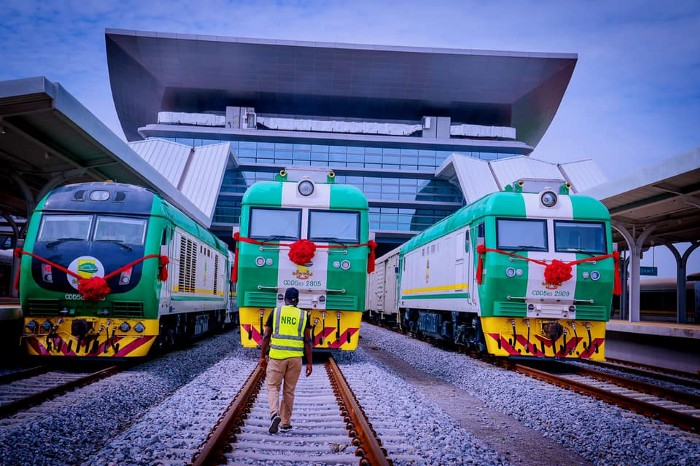 China’s relationship with the African continent has been in existence since the 15th century while creating an enjoyable and seemingly amicable relationship since the 1970s. As a developing country, China is still one of Africa’s largest bilateral trading partners and source of foreign direct investment. Its investment has helped spur infrastructure development and economic growth, especially since the end of the Cold War.

China’s relationship with Africa spans six centuries, as they started engaging with each other on official and diplomatic terms. During this period, China’s intent was draped in the warm embrace of openness, exploration, investment, and trade expansion in Africa. China’s need for oil, other resources, and a market to sell its products has driven its investment in Africa, using economic relations with Africa to achieve its development goals.

These reasons gave many Chinese companies access to almost all African markets, and today there are more than 1,000 of them operating in Africa. Within just a few decades, China became a vital political and economic power in the continent and Africa’s go-to nation for development finance.

The ‘Debt-trap’
Although Africa’s debt crisis has been around for years, the difference between the 1980s debt crisis and that of now is that the former was of concessional debt. These debts were loaned by the International Monetary Fund, the World Bank, or other multilateral institutions giving African countries better-than-market terms for repayment. But today’s debt case with China is that most of Africa’s debt is private debt owed to private companies and banks like EXIMBANK and CDB. 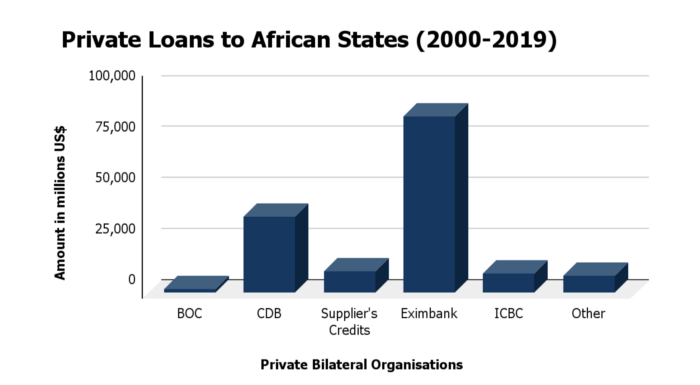 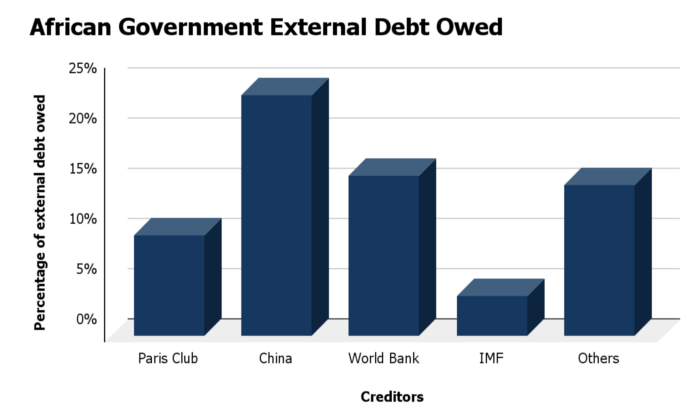 While many in Africa view China’s investment favourably, other countries and continents see it with many strings attached. Many Chinese companies made a ready offer of substantial loans for investing and building infrastructure projects such as roads, railways, and ports to aid their industrialisation. And due to a severe lack of infrastructure, the desperate need for modern transport links, and a dire need to boost their economic growth and global competitiveness in African countries, it was hard for them to reject China’s ready offer.

Hence, African countries increasingly and constantly look to China for loans. China saw this as a good bedrock for a beneficial ‘win-win’ economic relationship with African countries. But, over time, critics say that major infrastructure projects carried out by Chinese companies in Africa are too expensive, and the borrowing spree has come under scrutiny in recent years. As a result of this dependency, host countries (Africa) are burdened and entrapped with enormous loan debts they can’t hope to repay. According to an estimate from World Bank data, China accounted for 57% of low-income countries’ bilateral debt in 2020, holding 18% to 24% of African external debt in 2021. Their loans accounted for 30% of African countries’ debt payments that year. According to World Bank figures, the external debt stock of ‘Sub-Saharan Africa’ doubled throughout the 2010s, from $305 billion in 2010 to $705 billion in 2020.

While China itself is still an emerging economy with a per capita income of $10,153 as of 2019, the CLA Database estimates the continent has signed 1,188 loan commitments worth $160 billion with African governments and their state-owned enterprises between 2000 and 2020. And, 80% of these loans were on commercial terms to finance economic and social infrastructure projects like transport, power, telecoms, and water, secure commodity supplies, and develop its global network of infrastructure projects, the Belt and Road Initiative.

African States in debt to China
According to World Finance, from 2012 to 2017, Chinese loans to countries in sub-Saharan Africa grew tenfold to more than $10bn per year, with an estimated 24% of African governments’ external debt owed to China, according to the Jubilee Debt Campaign. How did this happen? During the 2008 financial crisis, when global interest rates were low and money was cheap, these African countries sought greater returns using riskier investments, including African sovereign debt, by taking on more loans to fund infrastructure and other development projects. And for some reasons best known to the Chinese government, China focuses on lending to resource-rich and strategic countries in Africa.

In 2015, the China-Africa Research Initiative (CARI) at John Hopkins University identified 17 African countries with risky debt exposure to China, potentially unable to repay their loans. Eight include Zambia, Kenya, the Democratic Republic of Congo, Ethiopia, Djibouti, Cameroon, Nigeria, and Angola. Djibouti, the Republic of Congo, and Zambia remain most at risk of debt distress from these Chinese loans. 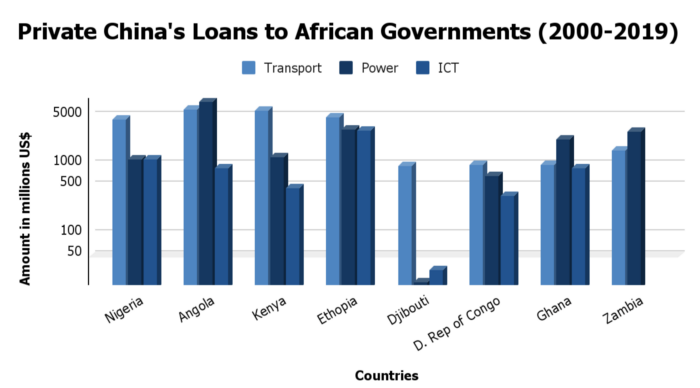 As of 2020, according to the Chinese Loans to Africa Database, The Democratic Republic of Congo has an estimated debt of $2.3 billion owed to China, with CHEXIM being their primary lender of over $1.0 billion and $673 million going into transport and power. Ghana has an estimated deficit of $5.3 billion that it owes to China, allowing China to finance over $2 billion worth of rail, road, and bridge networks in Ghana in exchange for access to 5% of Ghana’s bauxite reserves — a crucial source of aluminium.

The most recent summary of Nigeria’s external debt stock shows that Nigeria owed China about $7.3 billion. Being one of China’s most prominent debtors, Zambia has an external debt estimated to be 30% of its GDP to China, reaching nearly $10.1 billion of debt in 2018, up from $1.9bn in 2011. Kenya owes China an estimated $7.9 billion in debt, with $6 billion funding infrastructure projects across the East African country.

Beijing also accounted for nearly half of Ethiopia’s external debt and lent at least $13.7 billion to Ethiopia between 2000 and 2018. Angola’s debt owed to China currently stands at $42.6 billion. At the last estimate, every Angolan owes $754 to China, which is more than seven times what’s owed to its other creditor, Israel — in this case, each Angolan owes Israel $106.

Consequences
Unfortunately, China is reportedly guilty of aggressive loans with terms that favour the Chinese government unfairly. For example, the contract between Kenya and China to construct the Mombasa-Nairobi Standard Gauge railway mega-project shows that the country could lose the Mombasa port to the Chinese government if the National Railway Corporation defaults on the payment of $ 2.27 billion.

Africa’s second-largest producer of copper, Zambia, could lose state-owned assets such as power-producer Zesco to the Chinese if the country defaults on its loans. Angola, which is Africa’s 2nd most significant oil producer, may lose most of its precious natural resources since they are going towards repaying Chinese debts. Its ability to repay the debt is also largely dependent on the oil price.

COVID-19 Impact
The pandemic also worsened Africa’s debt crisis. As COVID-19 spread across the world, including the African continent, several African leaders have pointed to the COVID-19 pandemic highlighting unresolved underlying tensions and creating more economic strains, especially in line with their debt burden with China. And according to the International Monetary Fund (IMF), 20 low-income African countries were in financial distress in the second half of 2021, due mainly to their debts to China, as It’s still unclear how much money Africa owes China.

Most of China’s loans to African countries were designed to be repaid using natural resources and commodities such as oil, bauxite, or copper instead of cash. Unfortunately, during the early period of the pandemic, until now, sub-Saharan African countries faced a recession for the first time in 25 years, which made prices for natural resources and comedies drop. So, when the costs of these resources dropped, repaying loans and restructuring their debt was difficult.

The opacity of China’s dealings in Africa and the lack of transparency exhibited by the Chinese and these African countries also contributed to their unresolved debt problems. Since African countries also borrowed more from private lenders than official bilateral loans, the financial details and terms of its loans and commitments to the continent typically remain vague, as there’s a big vacuum of information and unreported liabilities with stakeholders on both sides. So, it has been difficult for international agencies such as the World Bank and the IMF to help them restructure and renegotiate their debts.

China’s Agreement
We should know that with China’s increasing involvement with Africa and its commitment to providing loans for large-scale projects, any solution to Africa’s debt problems must first address its relationship with Beijing and private Chinese companies operating on the continent.

However, Chinese banks and other countries have been stepping in to restructure African debt for the past two decades. Still, this action requires more efficient coordination. China has also been engaging in renegotiating debt commitments and, in some cases agreeing to deferrals on payment deadlines with indebted countries. So far, China has forgiven over $10bn in debt to Africa, and this year, China has engaged in debt renegotiations with 15 countries globally, with nearly half of those being African. Since the pandemic, China’s debt relief has fallen into four distinct categories according to CARI:

For its part, Angola’s debt renegotiation resulted in a three-year deferral on principal payments of its $6.2 billion loans. Angola will receive deferrals and interest-free aid of about or more than $3.9 billion in debt relief from Chinese banks from 2020 to 2023. China cancelled Botswana’s debt; this amounted to about $2.2 million. China has suspended $468 million in debt in Zambia, $227 million in Kenya, and $190 million in debt in Ethiopia. In March 2021, China cancelled $37.5 million of debt for Mozambique. China’s Export-Import Bank of China (EXIM CHINA) also forgave $110 million in loans to Zambia and $378 million to Kenya.

Also, the Chinese government is now in a critical financial position because of its foreign lending. If a debt default in which African countries cannot meet the debt repayment, China would bear substantial financial losses and pressure from its citizens. For this reason, they are unlikely to take a unilateral approach to debt forgiveness, especially on concessional loans and commercial loans, which constitute the majority of African debts owed to China.

These short-term debt relief agreement efforts give these African countries a period to get out of economic difficulties and avoid a pile of bad debt. So, as a member of the G-20 alongside the IMF and World Bank, China may likely participate in that collective debt relief effort such as postponement of loan payments, debt restructuring and renegotiation, and debt/equity swap rather than the blanket relief. If these short-term arrangements do not help the domestic economies of debtor countries improve, that could signal danger for Beijing’s balance sheets.

Improving the Debt Situation
Africa can also improve its debt and independence to the Chinese government by first building an economy to expedite its growth, expedite its size, and raise domestic resources to advance its development plan. Improving their debt situation is also embedded in them being transparent with their debt to reform their debt management. Africa should adopt comprehensive debt data disclosure requirements following publicised, predictable and binding legal procedures in incurring new financial obligations. These financial obligations should include loan repayment arrangements; an example is the recourse-backed loans.

They should disclose their loan amount and contractual terms to their creditors and the multilateral financial institutions while making the information publicly available through national platforms to hold relevant decision-makers accountable. Now, Transparency alone won’t improve the debt situation and ensure responsible borrowing. But, good governance that includes accountability, reasoned decision-making, and practical institutional arrangements will help African countries beat the debt situation.

Debt Independence also isn’t expected to happen overnight because some of China’s loans go a long way in building infrastructures and encouraging economic growth. Nonetheless, there should be a specific limit to Africa’s aid from China. It’s also essential that African countries leverage their natural resources rather than selling them out — She needs to trade with itself. Science and technology are also another basis for the transformation of African countries. Thanks to some already constructed infrastructures and some tech systems put in place by the Chinese, Africa only needs to build expertise in these areas. It wouldn’t be easy and may not even guarantee complete independence from China, but it will go a long way.