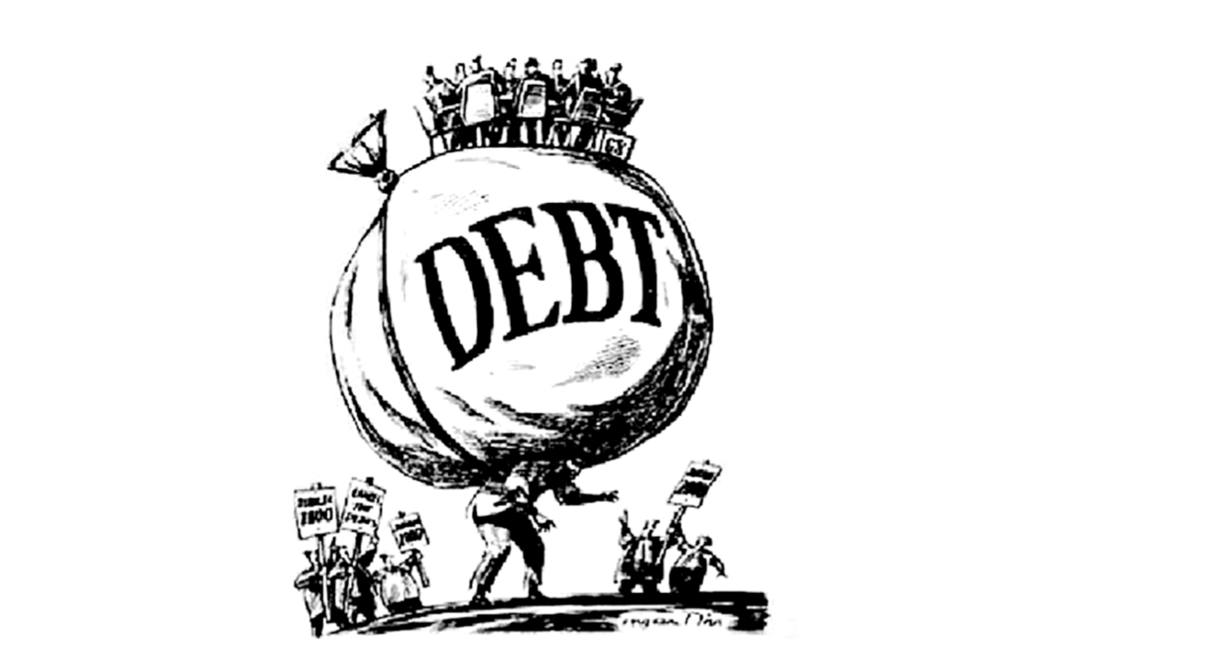 In the last few years, Nigeria’s debt has grown significantly; The Nigerian economy, which has not been doing well since 2015, further deteriorated amid the COVID-19 pandemic. In Nigeria, debt is growing faster than GDP. This has become a growing concern for Nigerians and for international investors who are discouraged for fear of overtaxation to service debt. This research looks into Nigeria’s debt, its sustainability and its impact on the Nigerian economy; as well as its effect on Nigerian entrepreneurship.

According to a report published by the Debt Management Office Nigeria (DMO), the current total public debt as at September 30, 2021 stands at a staggering $92 billion, with its Naira equivalent at ₦38 trillion having external debt at $37 billion and domestic debt at $54 billion. This is currently Nigeria’s highest recorded debt and it surpasses the combined debt of the past three Administrations.

This development has led to a lot of conversations with one side believing that the current debt is sustainable and may still become something positive if the government is able to keep the debt-to-GDP stable. The other side is of the opinion that the high debt value is running the economy to the ground. Trading Economics predicted a debt-to-GDP of around 36% for Nigeria in 2022 and today the debt-to-GDP is at 34.98% from a previous 29.10%. Evidently the debt-to-GDP is approaching the threshold where it may no longer be sustainable and could ultimately create critical issues for the Nigerian economy.

To put things in perspective, Nigeria is currently ranked 5th by The World Bank on the list of 10 countries with the highest debt exposure. The question on everyone’s mind is ‘How will this debt impact businesses and the economy at large?’

The Effects of Dept on The Economy

According to a report by the Debt Management Office, DMO, Nigeria's debt is currently at $92 billion, as at September, 2021, with a GDP of $432 billion and a debt-to-GDP of 34.98%. Economic theory suggests that reasonable levels of borrowing by a developing country may enhance its economic growth, however if a country’s debt level surpasses the nation’s debt repayment ability, expected debt servicing will become an increasing share of the country’s future output level. However, even though Nigeria's debt situation is far below the borrowing levels of some developed countries like the US, and the UK, the World Bank, and other international monetary institutions, do not seem to show confidence in Nigeria’s ability to delicately handle such robust debts.

The United States economy is proof that this theory is accurate. The United States currently has a debt-to-GDP of 124.72% and has its national debt at just over $30 trillion but has continued to sustain its economy, recording an unemployment rate of 4% contrast to Nigeria’s 33.3%. Despite the US being in 3000x more debt than Nigeria and having a debt-to-GDP 3.5x above Nigeria’s. The US economy has grown more, experienced less inflation, more infrastructure and lower poverty levels, than the Nigerian economy has.

In Nigeria, despite the steady increase in public debt the stats show that economic growth has remained low with increasing levels of poverty. Since the 2016 recession Nigeria has struggled with a higher debt service to revenue ratio. Recent data in Nigeria shows a rapid increase in government debt and debt service payments, despite lower growth rates and increasing poverty rates. This is of concern to researchers and policy analysts.

Some of the world’s strongest economies are also operating with high national debt. This also applies to certain economies across Africa. But some of these economies have been able to sustain their debt and build on that. 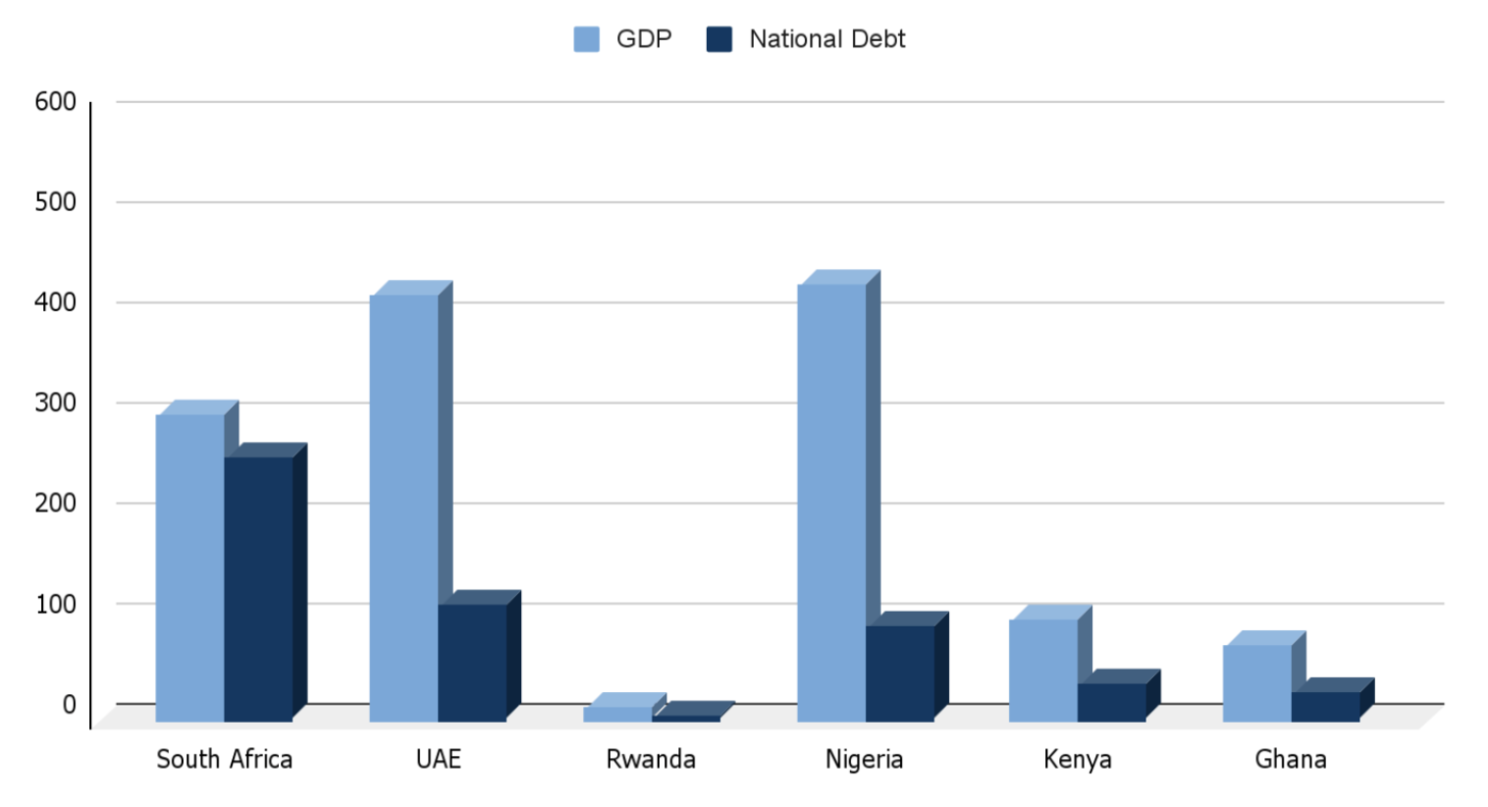 From our study, the UAE economy has economic similarities with the Nigerian economy; the UAE’s national debt is currently at $113 billion, relative with Nigeria’s $92 billion; with the UAE’s GDP of $421 billion, in contrast to Nigeria’s GDP of $432 billion.

Per the Global Competitiveness Report 2019, the UAE was ranked 1st regionally and 25th globally in infrastructure. In 2019 the UAE had a federal budget of $16.3 billion with particular focus on citizens’ well-being, health and education. The approved budget for the UAE in 2022 is a total sum of $15.7 billion with 41.2% allocated to the development and social sectors; that is health, education, pensions, social development etc. 3.8% of the budget has also been allocated to infrastructural growth. With inflation at 2.5% and unemployment at 5%, the UAE is one of the strongest and fastest growing economies in the world.

With relatively similar debt to Nigeria and a slightly lower GDP, it is a wonder to economists how Nigeria is still far behind with respect to infrastructure, social development and economic growth. Out of 137 countries, Nigeria was ranked 132nd in infrastructure, 136th in health and education and 122nd in macroeconomic environment. This ranking was collated by the Global Competitiveness Index 2017-2018 Edition.

Clearly unsustainable public debt is discouraging investment in Nigeria and reducing its growth, global competitiveness, and financial markets are more susceptible to global shocks. The existing debt has led to investors driving up interest rates, lowering disposable income and increasing wages. Resulting in a reduction in profitability of businesses and by extension, a reduction in private investment.

A report published by the National Bureau of Statistics shows that Foreign Direct Investment fell by 49.6% in the second quarter of 2021, the lowest in 11 years. It is evident that Nigeria’s debt is an impediment on private businesses, more especially tech start-ups who rely primarily on foreign investment.

In January, 2022 the Vice President, Prof Yemi Osibanjo disclosed that the Federal Government would be launching an initiative that would focus on the poor. This initiative is supposedly to be powered by a loan from The World Bank. This loan is said to come up to ₦311 trillion Naira and will be for two years (2021-2023).

While some economists believe that Nigeria’s debt may still be sustainable on the basis that the current debt-to-GDP is not too high, and is sustainable, others believe that the economy will continue to decline because all output will continue to be used for debt service with nothing going into the country’s infrastructure. Potential investors will also be discouraged for fear that the more production there is, the more they will be taxed by the government so as to service public debt.

Inflation and Unemployment are also reflections of the strength of an economy and here a comparison is drawn between these global economies and Nigeria with regards to inflation and unemployment rates. 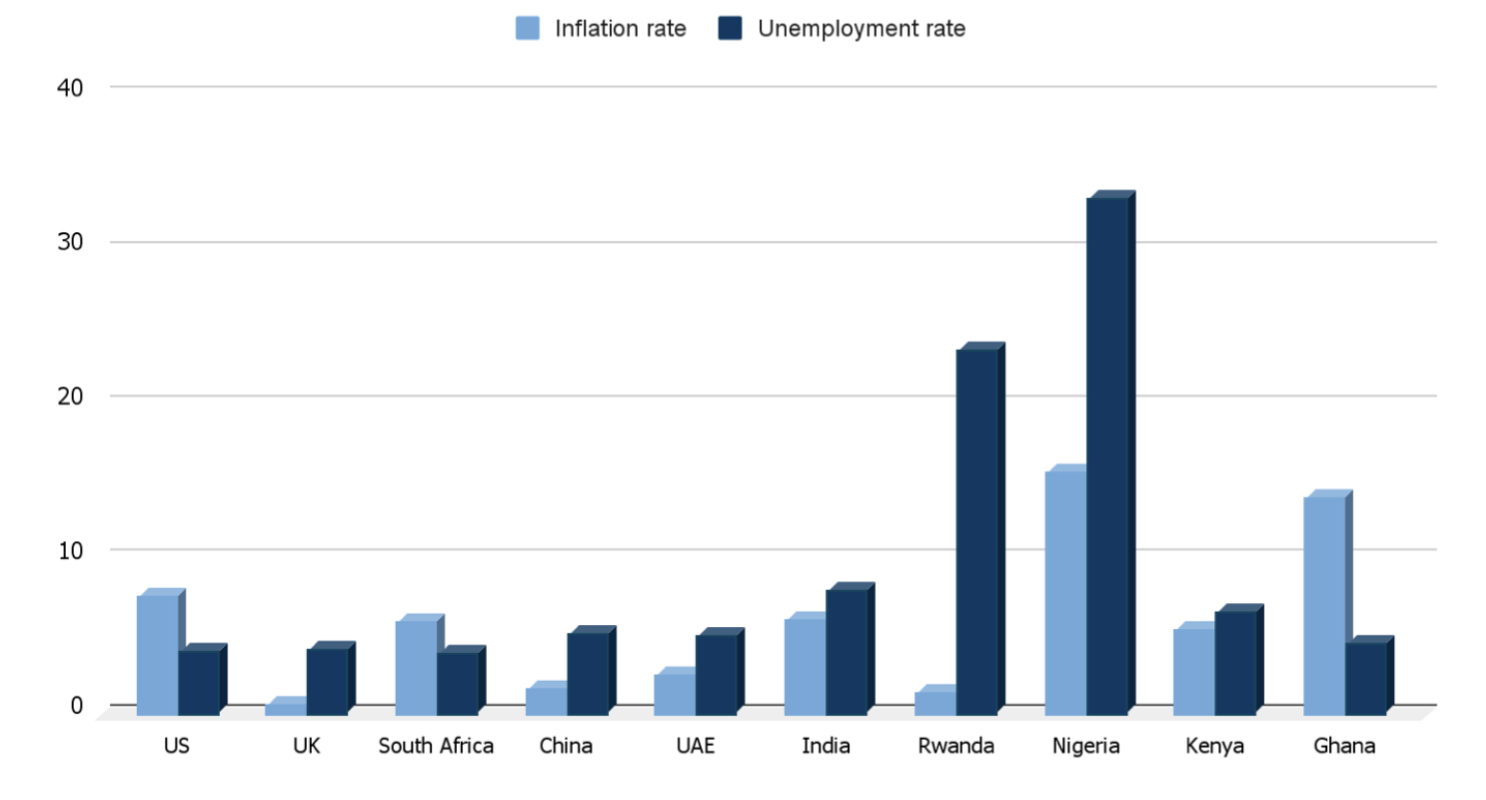 A report by The Conversation Africa, suggested that the government needs to promote economic growth by investing in infrastructure, especially roads and electricity as this will provide access to capital for small and medium sized enterprises and will support agricultural development.

The key factors contributing to Nigeria’s growing debt include: rapid growth in public spending, particularly on capital projects, borrowing from the international community at non-occasional interest rates, a decline in oil earnings beginning in the late 1970s, and an increased reliance on imports, all of which contributed to the emergence of trade arrears.This research also highlights that the economy is and has always been particularly reliant on oil as its primary income source and there is a need to branch out or diversify.

Since 2015, Nigeria’s debt has been on an aggressive, upward spiral. This development has led to a large percentage of Nigeria’s revenue going into debt servicing. However despite Nigeria’s debt burden, it has not lost its borrowing capacity as several institutions and countries are still willing to loan Nigeria money. In 2015, Nigeria used 31% of its revenue to service debt.

Debt servicing is the most challenging effect of Nigeria’s debt burden and a major stumbling block to economic growth. This is because a great percentage of Nigeria’s revenue continues to be used to service debt rather than infrastructural, social and economic growth; and with debt servicing, the economy remains in an unending cycle of greater debt. The possible way out of this debt quagmire would be reducing borrowing to produce more, i.e. lightly borrowing (with fairer terms) for industrialisation, technology, education and export. If the country can focus on internal development and growth, the economy could be strengthened to improve unemployment, inflation and infrastructure, rather than be burdened by unending debt.